Back in 2012, when I had begun my study of fractals, and had begun painting them, I wrote a blog post on my other website, entitled Fractal Dimensions.  It contained my thoughts about the missing dimensions that some cosmologists would like to discover/elucidate in order to make sense of the equations describing String Theory.

While it may be a naive article to have written, given my minimal physics education, and I may be wrong in my approach, I do think there is still merit to the idea.  As it turns out, there is such an area of study as Fractal Cosmology, so I am not completely off the mark.  And since I wrote that post, I have read quite a bit of Mandelbrot’s The Fractal Geometry of Nature.  It turns out, (as I mentioned in my first post on this blog) fractal geometry is all about dimensions – specifically, a fractal is defined as:

A set for which the Hausdorff Besicovitch dimension strictly exceeds the topological dimension.

i.e. every set with a non-integer D is a fractal, but a fractal may have an integer D

So, it has been established that much of nature can be interpreted or described using fractal dimensions.  Can ALL of it?  That is a big question.  And when we refer to fractal dimensions, are we referring to the same kind of dimensions that cosmologists refer to in String Theory?  I wish someone would tell me.

For now, and since I am an artist, I use what my eyes tell me.  In July of 2012, the Higgs Boson was finally found at CERN.  Here is a recent article referring to that discovery and its validity:

Confirmed: That Was Definitely the Higgs Boson Found at LHC – D-brief | DiscoverMagazine.com.

Check out the image in that article.  At the time of the discovery, I was already working on a painting based on this fractal right here: 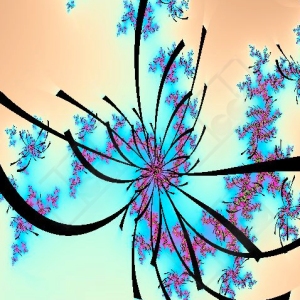 Do you see the resemblance of the black parts of this fractal to the yellow parts of the collision image?  Not a proof, by any means, but it makes you wonder.

Here is the finished painting, which was beside me in the video I posted in “Publicity”: 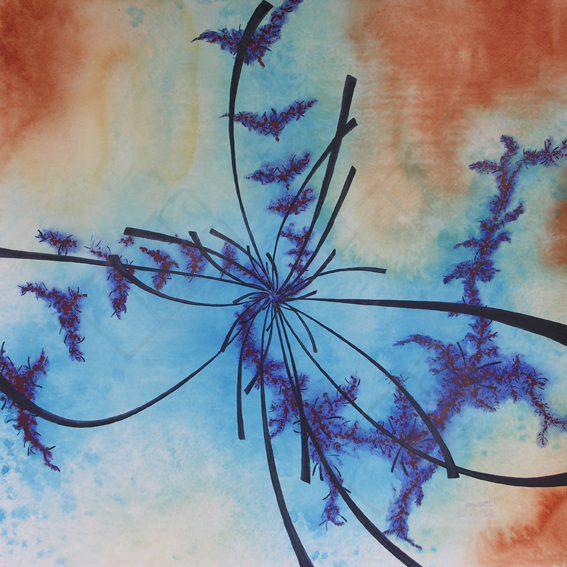 I think this may be the first time I’ve shown both a digitally generated fractal and the painting based on it, at the same time!

More thoughts another day… it’s thundering a lot outside and I could lose power any second!

1 thought on “Thoughts on fractals and dimensions”

This site uses Akismet to reduce spam. Learn how your comment data is processed.