As you may know, if you have been reading all of my blog posts, I like to dabble a little in cosmology.  Not that I really know anything about it, but it fascinates me, and I like the kind of abstract thought it stimulates.  I was given a Great Course one Christmas on Dark Matter, Dark Energy, The Dark Side of the Universe, which I’ve enjoyed a great deal.  Dr. Sean Carroll is great at explaining cosmology in a way that I, at least, can understand.  I also read Brian Greene’s The Hidden Reality, a fascinating book.  I subscribe to many Facebook Pages which post news about the latest pieces of knowledge in this field.  The abstract thought appeals to me, and I think I’m pretty good at it, but my math and physics skills are limited to helping out my children when they were doing grade twelve homework.  Which may be nothing to sneeze at, but is less than what is required for particle physics.

One of the things that really strikes me, is that the visual components, be they illustrations or actual data translated into an image, of almost every piece of news in cosmology, are recognizable to me as being fractal in nature.  Perhaps it is because I’ve spent so much time looking at fractals, zooming in, and examining them from every angle, that I notice this.  I am always mystified when no mention of fractals is made, in these cases.  I’ve written a  whole post (and another) about fractal dimensions before, so I won’t go into that here, but that’s another part of the puzzle I like to think about.

I know these two fractals don’t really illustrate anything in particular, but they make me think along the lines of particle physics, and stardust, and the early universe. 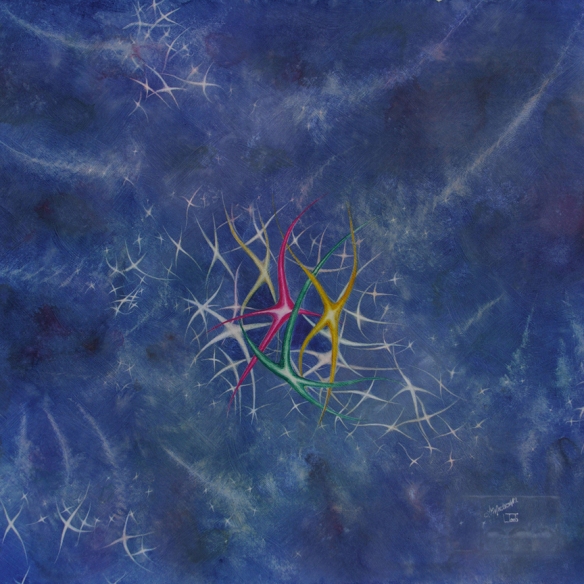 This past summer, during my exhibit, I was told about a person in the same city (London, Ontario) who, it seemed, had a lot of the same thoughts I was having about the fractal nature of the universe.  She is a software engineer and has been studying fractals for much longer than I have!  Needless to say, her math skills are much better than mine.  I was fortunate to meet her (her name is Lori Gardi) this fall.  She has two websites, the first of which I’m going to direct you to Here, in which she has laid out some of her thoughts in a pretty clear way.  I’ll link you to the more recent one later… I think it’s a good idea to start at the beginning of her thought process. We (artists, software engineers, mathematicians, physicists, philosophers) may not all have the same thought processes or reach the same conclusions in our explorations of fractals and their role in the universe, but all avenues should be explored as long as they can exist within the rules that have been truly established by scientists and mathematicians in the past.  I am, unfortunately, not capable of judging whether anything follows those rules, but others who can, need to at least look at this work with an open mind and decide for themselves. ESPECIALLY if it may help solve any of the mysteries still out there.